ENGLAND: exciting u19 opportunity to travel to Bratislava

The England National Team Programme are taking five teams to Bratislava at the beginning of April.  Now there is an exciting opportunity to add a sixth team into the mix in the form of an England u19 development camp.

As a direct response to an opportunity to play Romania U18’s in Bratislava on 3rd and 5th April, England GM Gary Apsley and head coach Ben Pitchley have today announced a plan for 20 strong England U19 camp with a minimum two game series against national team opposition.

The plan is for the players and staff to fly to Bratislava from Luton on Monday 2 April returning on Friday 6 April. While in Bratislava the team will take part in a development camp with training ice each day with two games against Romania on Tuesday and Thursday and a possible third game against strong local opposition on Wednesday.

This opportunity is being provided in addition to the regular U19 England team that is formed for the annual England v Scotland game that is the curtain-raiser for the Conference Tournament. That game is still going ahead and news on the U19 programme is expected later this week.

For the Bratislava camp and games Ian Pound will take on the role of team coach and Gordon Douglas will take on the role of team manager as the regular U19 staff members Ryan Aldridge and Paul Kelsall are already committed to OHA duties. It is intended that the team will travel with an assistant coach and sports therapist who will be announced in due course and the ENTP goalie coaches on duty with the junior teams will support this team too.

Due to the timing of the opportunity and the arrangements that need to be made there will be just one trial which will be held on Friday 23 March 2018 at Ice Sheffield from 8:30pm till midnight. Ideally the trial will involve 24 forwards, 12 defencemen and 4 goaltenders.

From this trial group the team will be selected to consist of 12 forwards, 6 defencemen and 2 goaltenders.

Messrs Pound and Douglas are now inviting players born in 1999 and 2000 who meet the invitation and selection criteria and who are able to make the trip to Bratislava to send an email expressing interest in attending the trial event on 23 March. 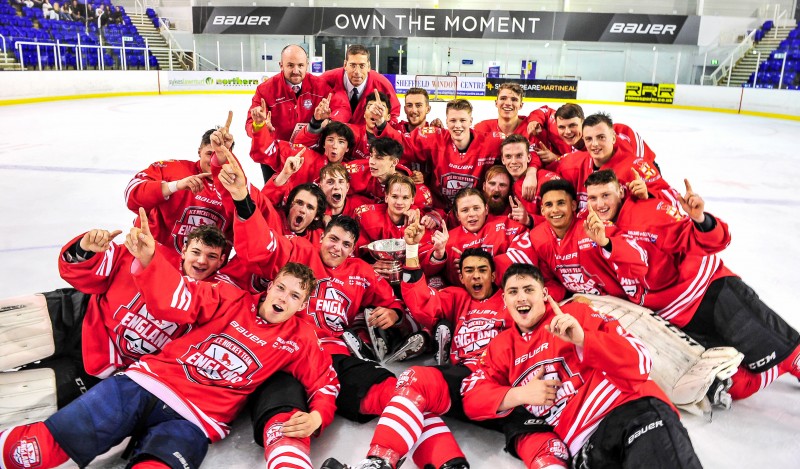 Players should send their email to gogsid@hotmail.co.uk to be received no later than 10:00am on Friday 9 March 2018
confirming their name, team they are playing for and a contact number.

Upon receipt of emails from interested players the Staff will select players to attend the trial and will publish the select list on the EIHA Website on Monday 12 March at 10:00.

The cost to the players for the three day camp has been set at £300 per player which is based on the usual ENTP camp rate of £100.00 per day. The fee of £300 per player includes return flight, accommodation (twin-rooms), all meals, transfers from airport to hotel/rink and all match fees. Players will be issued with a loan shirt/socks.

Flights and accommodation arrangements are being made on behalf of the team and the party of up to 25 is expected to fly-out from Luton on the afternoon of Monday 2 April.

More news around the future development of the England u19 team will be released later this week.