The fourth EIHA Rec Masters Championships proved to be one of the most competitive yet with 12 teams originally signing up.  A last minute withdrawal gave the organisers a re-scheduling headache, but it did not detract from the extremely exciting games over the weekend.

With just one 20 minute period in every game, there was no time for caution as teams had to hit the ice running.

Whilst some teams were there just for the fun of this over 35 competition, the intention of others to dispose reigning champions Cleveland Comets was more than evident.

Day one saw Group A proving highly competitive with Cleveland and Solihull Vikings pushing for top spot and if you ever thought that just because you played in the same rink that you would get a favour from your team mates, Streatham proved it wrong. There two teams sharing a 2-2 tie that meant neither team made it though to the semi finals with Night Wolves dropped point seeing them finish level with Solihull Vikings but missing out on goal difference.

In Group B one of the pre-tournament favourites Durham Dragons had a disastrous first day with only three from the available six points. Grimsby Lightning and Solihull Spartans leading that group after the first day.

Day two saw Durham stretch their total to five points with another win but then have to wait for the decisive match between Solihull Spartans and Widnes Wildcats to see who would join group B winners Grimsby Lightning in the semi finals.

Spartans looked on course for their first semi final placing when they took a lead early on but then let it slip losing out 2-1 to the Wildcats thus letting Durham in through the back door.

The first semi final saw arch rivals Durham Dragons and Cleveland Comets paired up and a tight game looked set to go to penalty shots but Comets had other ideas and Simon Hehir netted with 75 seconds remaining. In the second semi Grimsby Lightning in their own words produced a shock result against an extremely strong Solihull Vikings side that seemed to have lost all ideas as Lightning struck 5 goals to Vikings sole marker.

Paired up against Cleveland for an intense final it was the Comets strength in numbers that was to prove a telling factor and Cleveland netting twice inside a minute eight minutes into the game knocked the stuffing out the Grimsby team. 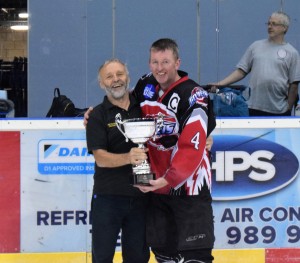 The shortage of players at the over 35 group saw a number of teams guesting imports from other clubs but Cleveland’s home grown talent proved for a third year that you cannot substitute anything for team work. 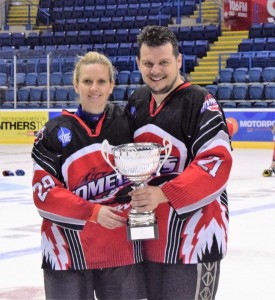