The new relationship between England and Great Britain for women and girls hockey was confirmed last month, building a single pathway for young female players to transition towards Great Britain teams.

This past weekend in Sheffield almost 60 girls – split into u13 and u16 groups – took part in a two-day camp in Sheffield which put them through their paces on and off the ice in front of England and Great Britain coaches.

Each group had two on-ice training sessions per day and each evening concluded with a scrimmage game. Around that the rebranded UK Women’s Development programme had a schedule of strength & conditioning, fitness sessions, classroom lectures and video sessions.

ENTP director Geoff Hemmerman also held classroom sessions with the parents to explain what the girls have been asked to do but also around the opportunities in girls and women’s hockey.

A very tired group headed home on Sunday night but the feedback from players and parents alike has been positive, with attention already turning to the second camp planned in October. The attendance next time will be much larger with many players identified unable to attend in August due to holidays and other circumstances.

Geoff Hemmerman said: “I’m passionate about player development, particularly in the women and girls game. A lot has been made of the partnership and the UK Development tag – in reality I don’t care what it’s called or what badge it’s under, I just want the best chance for the players to make their way in the game.

“The groups worked really hard this weekend, a lot of ice time plus the fitness and off-ice work. The coaching staff were great too – they made the sessions fun but educational and from the reactions I think the players and staff got a lot out of the weekend.”

Great Britain women’s head coach Cheryl Smith agreed saying: “When the camp was announced I couldn’t wait to see what level of talent we had. The girls didn’t disappoint, it was brilliant to see.

“We already have a reserve list for the October camp such is the interest from girls all over the country and the system is now in place to help the players reach their potential, whether that’s Conference, England or Great Britain.”

The coaches made special mention on Sunday night of goalie Emily Johnson, aged nine, who played with the u13 group all weekend then was asked to cover in net for the u16 final scrimmage as they lost a goalie to injury.

Emily, who played in the u11 Conference Series for North last season, happily donned her gear once again and played for another hour.

“Emily did great,” said u13 head coach Nicci Wardell. “She played for an hour with us then I asked if she could help with the u16 as they had lost a goalie. She never batted an eyelid, just said yes and went out and killed it for another hour!

“Emily played exceptionally well in view of her small stature against girls some of whom were five years older than her.” 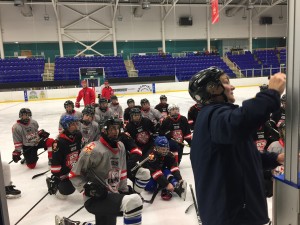